Manuscript submission for a special issue of Cancers-MDPI

X-omics consortium member Alexander Hoischen will be one of the guest editors of a special issue of Cancers MDPI, an open access journal covering all aspects of oncology.

The aim of this Special Issue is to stimulate discussion around the use and adoption of Optical Genome Mapping for clinical diagnostics in hematological malignancies.

For more than 40 years, the clinical evaluation of structural variation in hematological malignancies has primarily been driven by karyotyping. Karyotyping is a robust tool for evaluating changes in leukemia and other malignancies. However, additional testing (FISH or RT-PCR) is required to identify specific rearrangements between genes because of the relatively low resolution of karyotyping.

Optical Genome Mapping is a new technology that can detect structural variation within a sample at a much higher resolution than karyotyping. As such, it is a promising new technique for the clinical evaluation of chromosomal changes in hematologic malignancies.

We encourage you to submit your research articles and reviews in which you make use of Optical Genome Mapping, introduce software tools, provide technical improvements or produce novel research findings that may lead to new diagnostic insights.

Deadline for manuscript submissions is 31 July 2022.

Sunday, October 31 at 22:05 CET, NPO2 broadcast an episode of the VPRO program Tegenlicht. In this episode the work of Albert Heck, leader of the Proteomics pillar, on the human proteome was featured.

Knowledge about the proteome is increasing rapidly. Are we on the edge of a new era as we begin to crack the code of the protein? Find out watching the episode “Drugs of tomorrow: how the protein revolution will change the future of medicine”.

Following this episode, a Tegenlicht Meet Up took place. During this Meet Up the future of medicine was discussed with the filmmaker, several speakers and guests, including Albert Heck.

New leads in research into the origin of identical twins

The mystery of identical twins

Identical (monozygotic – MZ) twins cause much confusion to their parents and friends and make very cute cover photos for magazines, but despite a century of amazing progress in most areas of science we still have no idea how they arise. As MZ twins appear to crop up randomly in families at a rate of about 4 per 1000 births all around the world, neither analyses of possible genetic predisposition nor studies of putative environmental exposures have cast much light on the origins of MZ twinning. In contrast we are making fast progress on understanding the biological origins of nonidentical (dizygotic – DZ) twins, which run strongly in families, pointing to genetic influences. Not surprisingly, genomic studies are proving useful in finding the genes behind DZ twinning.

The processes leading to these 2 types of twins are very different. Dizygotic twins arise after double ovulation, in which the genetic predisposition of the mother plays a major role. Identical twins arise from a single embryo that splits into two in the very early stages of pregnancy and retain the same base-pair sequence of their genes. To date, it is unknown why this happens.

Now, researchers have made an important discovery: epigenetic information in the chromosomes differs between identical twins and others. These epigenetic differences are not in the DNA code itself, but in small chemical marks associated with it. Twin registries from the Netherlands, Great Britain, Finland, and Australia participated in the study. The researchers measured the level of methylation at more than 400,000 sites in the DNA of more than 6,000 twins. The researchers found 834 locations in the DNA where the methylation level was different in identical twins than in non-twins.

Professor Dorret Boomsma of the Netherlands Twin Register specializes in genetics and twin studies and spent most of her career working with twins and their relatives. Boomsma: "This is a very big discovery. The origin and birth of identical twins has always been a complete mystery. It is one of the few traits in which genetics plays no or very modest role. This is the first time that we have found a biological marker of this phenomenon in humans. The explanation appears not to lie in the genome, but in its epigenome”.

Professor Bruno Reversade of the Agency for Science, Technology and Research (A*STAR) in Singapore: “This amazing finding is diagnostic, it brings hitherto unknown insights into the fabrics for MZ twinning.  The next step will be to find out why this happens”.

Around the building blocks of DNA (the DNA code) are control elements that determine how genes are tuned and how strongly they are expressed. This is the so-called epigenome. A useful analogy is how the holding the shift key on a keyboard, can make the letter “a” become capitalized “A” allowing another level of regulation on how each letter or number on the keyboard can be displayed. Likewise, DNA methylation (like pressing the shift key) controls which genes are “on” and which genes are “off” in each cell of the body. The field that studies this tuning of genes is called epigenetics.

Dr. Jenny van Dongen, who leads the study is a researcher at the Netherlands Twin Register at the Vrije Universiteit, Amsterdam who specializes in epigenetics: ”These locations in the DNA are involved in functions in early embryonic development. In addition to insights into the fabrics of monozygotic twins, our results may lead to a better understanding of congenital abnormalities that occur more often in monozygotic twins in the future. A particularly surprising finding in this study is that we can determine from the epigenetic profile of a person whether he/she is an identical twin or has lost a monozygotic twin sibling early in pregnancy, also known as vanishing twin syndrome”.

Professor Nick Martin of the Queensland Institute of Medical Research, Brisbane, Australia adds: “This study could only have been done by an international collaboration of twin researchers. It provides an exciting new breakthrough. Instead of focusing on genomics, an epigenome wide association study was done, comparing methylation levels at over 400,000 sites across the entire human genome in Dutch MZ twins and controls. Jenny van Dongen found to her surprise large numbers of very strong signals, in non-random clusters, for example near the ends of chromosomes. Thinking the large number of findings might be some artefact she then sought replication data from 3 other twin cohorts in Australia, UK and Finland, and saw almost identical patterns in those. This was replicated when she repeated the experiment in a different tissue than blood. Meta-analysis of these results points to unusual methylation patterns in genes involved in cell adhesion which might explain why there is spontaneous fission of an early developing embryo into two identical halves. This finding may also provide important clues to the origin of numerous birth defects known to be strongly associated with MZ twinning.

Monozygotic (MZ) twins and higher-order multiples arise when a zygote splits during pre-implantation stages of development. The mechanisms underpinning this event have remained a mystery. Because MZ twinning rarely runs in families, the leading hypothesis is that it occurs at random. Here, we show that MZ twinning is strongly associated with a stable DNA methylation signature in adult somatic tissues. This signature spans regions near telomeres and centromeres, Polycomb-repressed regions and heterochromatin, genes involved in cell-adhesion, WNT signaling, cell fate, and putative human metastable epialleles. Our study also demonstrates a never-anticipated corollary: because identical twins keep a lifelong molecular signature, we can retrospectively diagnose if a person was conceived as monozygotic twin.

EnFORCE will develop diagnostic workflows for expression proteomics and glycoproteomics using the “PaSER” parallel GPU-computing platform from Bruker. This translational research will provide the foundations for routine implementation of holistic clinical proteomics data in both personalized and large-scale population biomarker applications. EnFORCE will work with patients with congenital disorders of glycosylation or multiple myeloma, aiming at providing less cumbersome, faster and successful diagnostics as well as personalized treatment strategies by better informed decisions.

, More information about the project

Every person appears to have a completely unique immune system. The way our immune system responds to pathogens varies from person to person. Researchers at Utrecht University and UMC Utrecht, including our core team member Albert Heck, discovered that each person develops a unique arsenal of antibodies, which are proteins produced as part of the body's immune response to infection. Also, the concentration of these proteins changes in a unique way during illness or after a vaccination.

Until now, this distinctiveness had not been noticed. The team developed an extremely sensitive analysis that reveals minute differences in mixtures of antibodies. The method is a refinement of mass spectrometry.

The results of this study may help explain why some people are more prone to becoming ill, or why they recover faster from illness than others. Extreme diversity in immune responses could also create new possibilities for personalized treatments and vaccinations. Results have been published in the journal Cell Systems.

A short introduction video about X-omics and our scientific contribution, now and in the future: 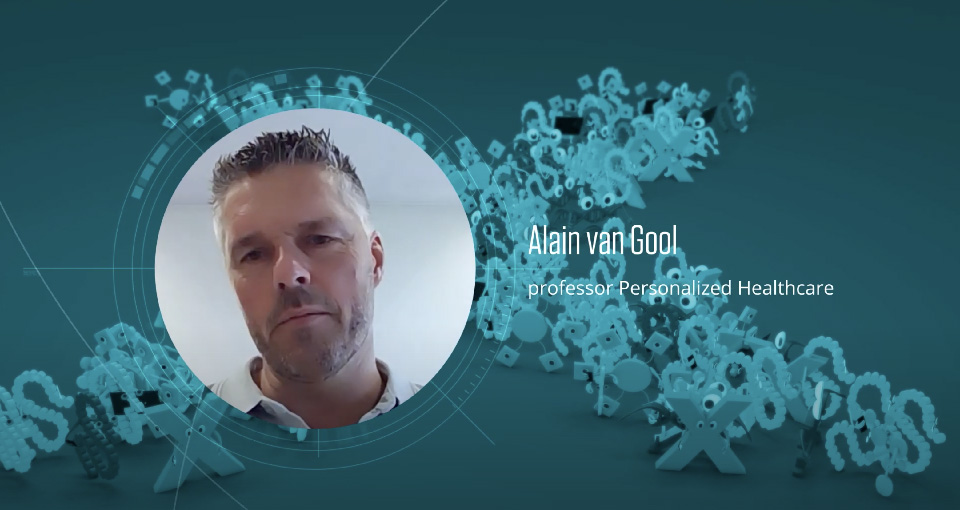 Human hereditary material is stored in 23 pairs of chromosomes. Although those chromosomes are quite stable, changes in number or structure can still occur. All these aberrations in the chromosomes can cause disease.Cytogenetics is the genetic discipline that examines chromosomes for such abnormalities. Most standard techniques (so called karyotyping, FISH and CNV-microarrays) can only visualize a part of the abnormalities or only with a limited resolution. Recently a new technique has become available - Optical Genome Mapping (OGM) – which can enable the detection of both the large and small changes. Recent research shows that OGM detects cytogenetic aberrations very quickly, effectively and accurately. Sometimes even better than all existing techniques together, as described in two proof-of-concept studies in which several consortium members of X-omics partner Radboudumc (Human Genetics department) were involved. Both proof-of-concept studies have been published in the American Journal of Human Genetics:“Next generation cytogenetics: comprehensive assessment of 52 hematological malignancy genomes by optical genome mapping” – https://pubmed.ncbi.nlm.nih.gov/34237281/.

Manuscript submission for a special issue of Genes-MDPI

X-omics consortium member Mohsen Ghanbari will be the guest editor of a special issue of Genes-MDPI, an Open Access journal of genetics and genomics.

This special edition will present the latest research findings and developments in the field of cardiovascular metabolism.

Findings from metabolomics studies have contributed to a better understanding of the metabolic changes that occur in cardiovascular diseases, and have identified new disease biomarkers. The integration of genetics, metabolomics, and other omics platforms in a systems biology approach holds potential for elucidating novel genetic markers and mechanisms for cardiovascular disease.

We invite you to participate and follow up the new publications. The identification of metabolic changes related to cardiovascular diseases using multi-omics approaches is particularly encouraged.

Deadline for manuscript submissions is December 15 2021.

Check out all the vacancies

Exposome-Scan builds on the knowledge gained within X-omics and Exposome-NL. The grant will be used to build a laboratory that will give researchers from all over the Netherlands the opportunity to study the exposome. Such a facility is unique in Europa, and even worldwide there are just a few places where large-scale research into the environment and health takes place.